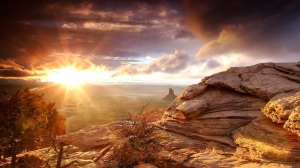 Among the many memories churning and surfacing this week, one came up of a most instructive incident. Dan and I went to a Baltimore Symphony concert which opened with Grofé’s Grand Canyon Suite. Music student that I was at the time, I spent the first movement following the form, the instrumentation, the way the themes were developed. When it ended, Dan leaned over and whispered, “Wasn’t that wonderful? You could just see the sun coming up.”

I had completely forgotten that that was what the music was depicting. Single people don’t get enough of these wake-up calls.